Meet Daisy: she is one of the newest members of the Marco Island Dolphin Community. She was born sometime between January 4th and February 12, 2021.

Her mother is Rangle – an experienced mother whose story captures the drama and challenges of a dolphin’s life. 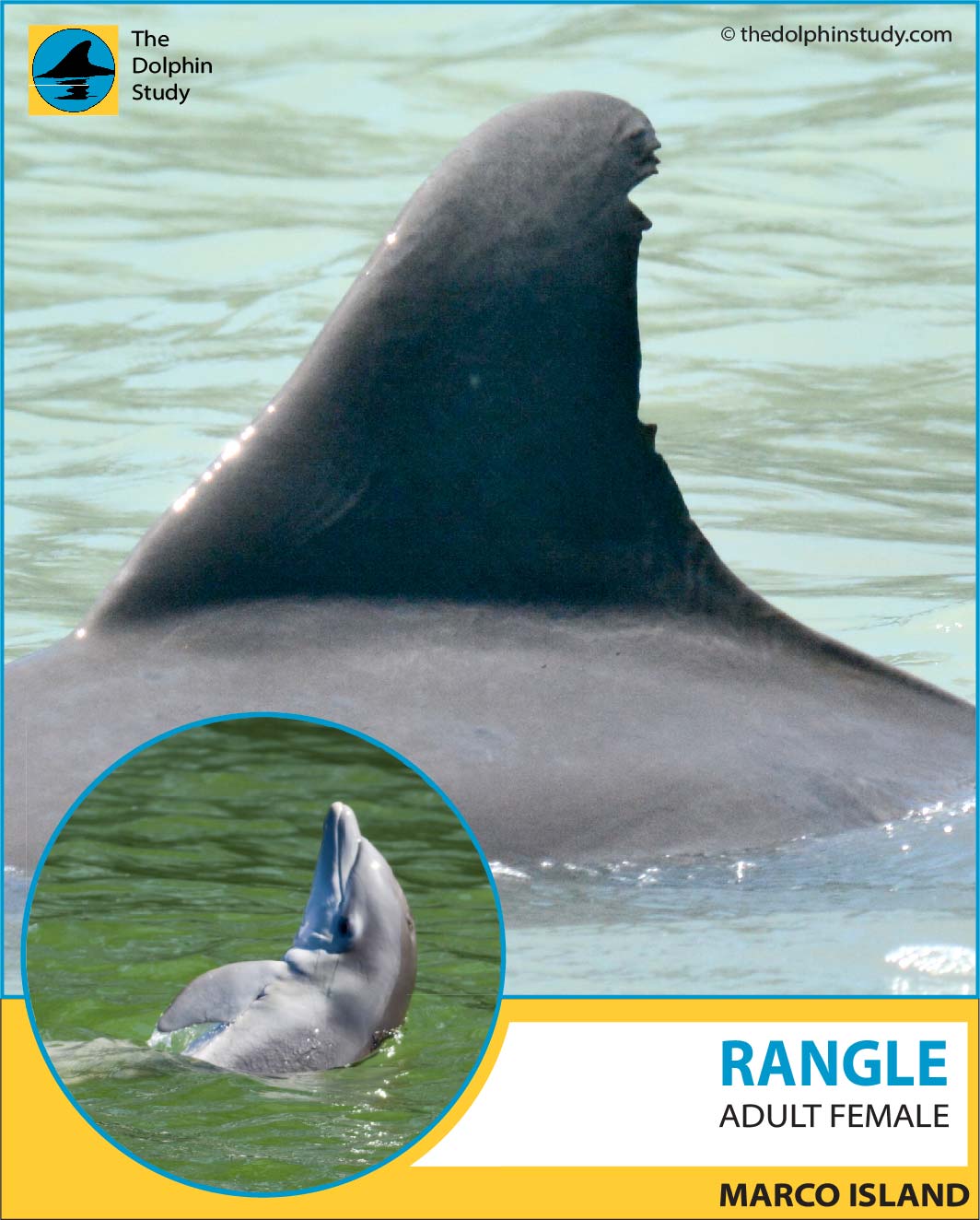 Rangle’s distinctive dorsal fin -the inset is a previous calf.

Rangle is a tough resilient mom who endured personal calamity and heartbreaking loss before ushering Daisy into the world.

She was already an adult female caring for a calf in 2006 when I first encountered her in the Big Marco Pass.

Since that time she has given birth to six calves that we are aware of. 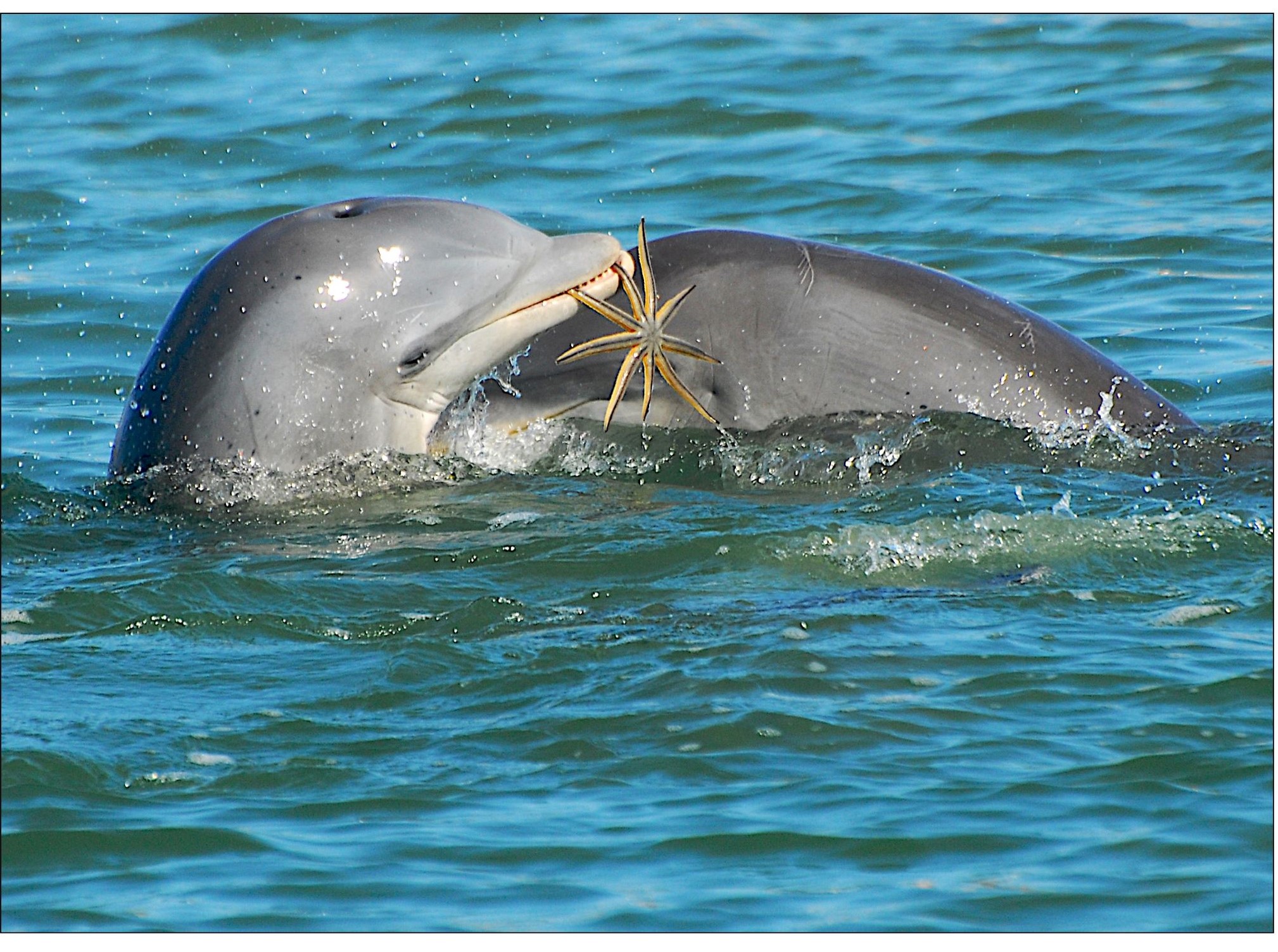 On December 23, 2011 while caring for her two year old calf, Mocha, disaster struck. Rangle was struck in the head by a boat propeller. 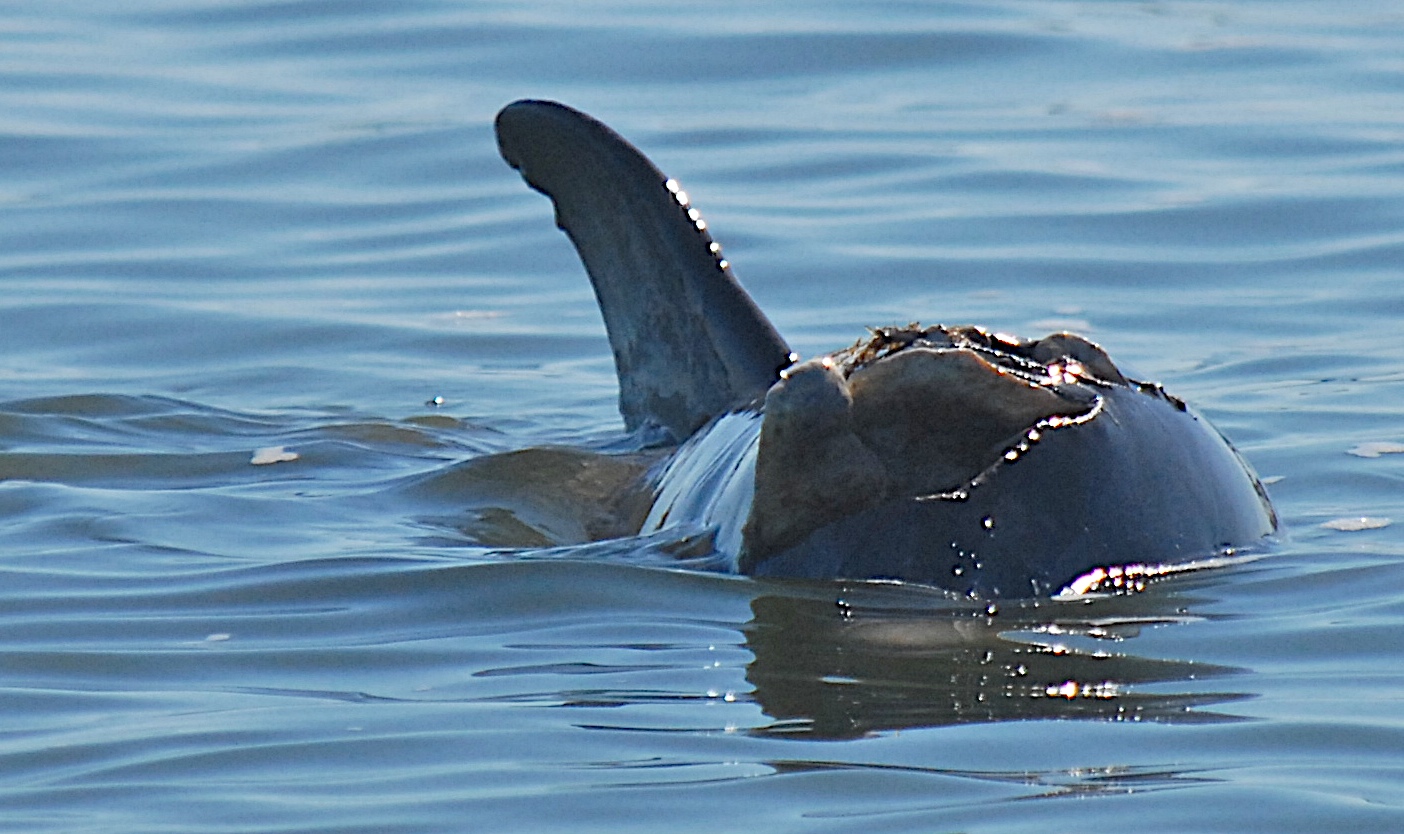 At the time of the accident we knew that Rangle was caring for a calf we had named Mocha that was just over two years old.

Considering the extent of the injury and reports that she was having difficulty breathing, it looked like Mocha would soon be an orphan. We hoped Rangle had taught her enough to survive on her own.

The bulbous structure on the front of a dolphins head where Rangle was struck is called the melon. It is filled with fats and oils and transmits and focusses the echolocation clicks produced in air sacs behind this structure. Those clicks bounce of things in front of the dolphin – a seawall, potential prey etc. and echo back to the animal. The echos are picked up by another fat filled structure – the lower jaw which transmits the information to the inner ear and eventually the brain via nerve cells. In this way, a dolphin like Rangle can ‘see’, even in the often turbid waters around Marco Island.

Much of the fats and oils in Rangle’s melon spilled out and washed away. 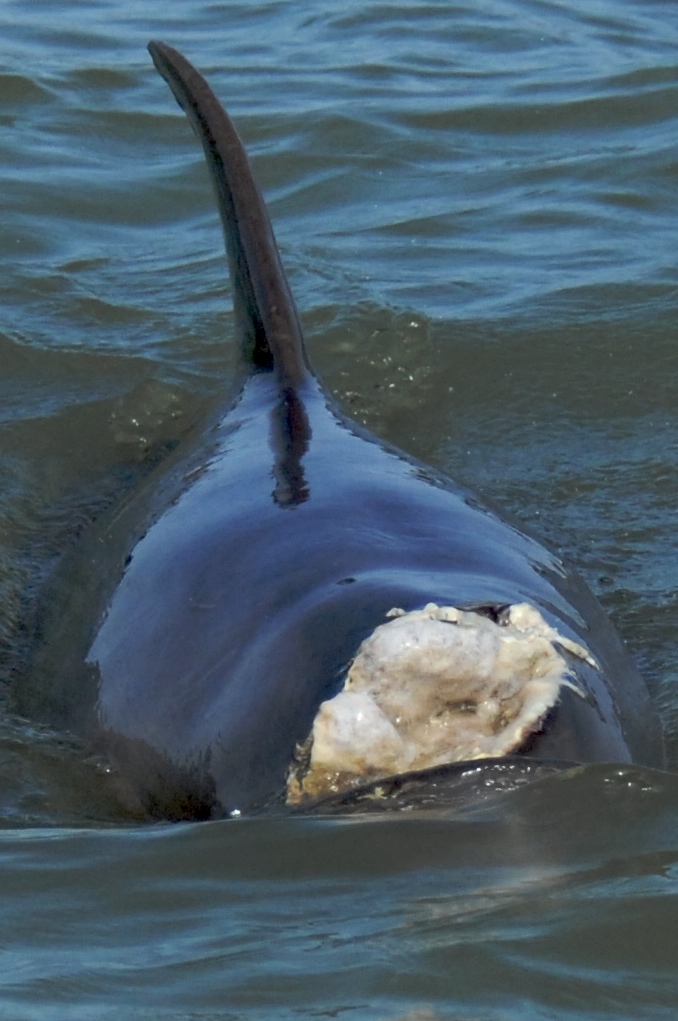 Rangle’s injury ocurred just in front of her blowhole in the fat filled structured called the melon.

As it turns out, we underestimated how resilient Rangle was. The wound started healing. Observers reported she was having less difficulty breathing.  By February 4th the wound was stating to close. 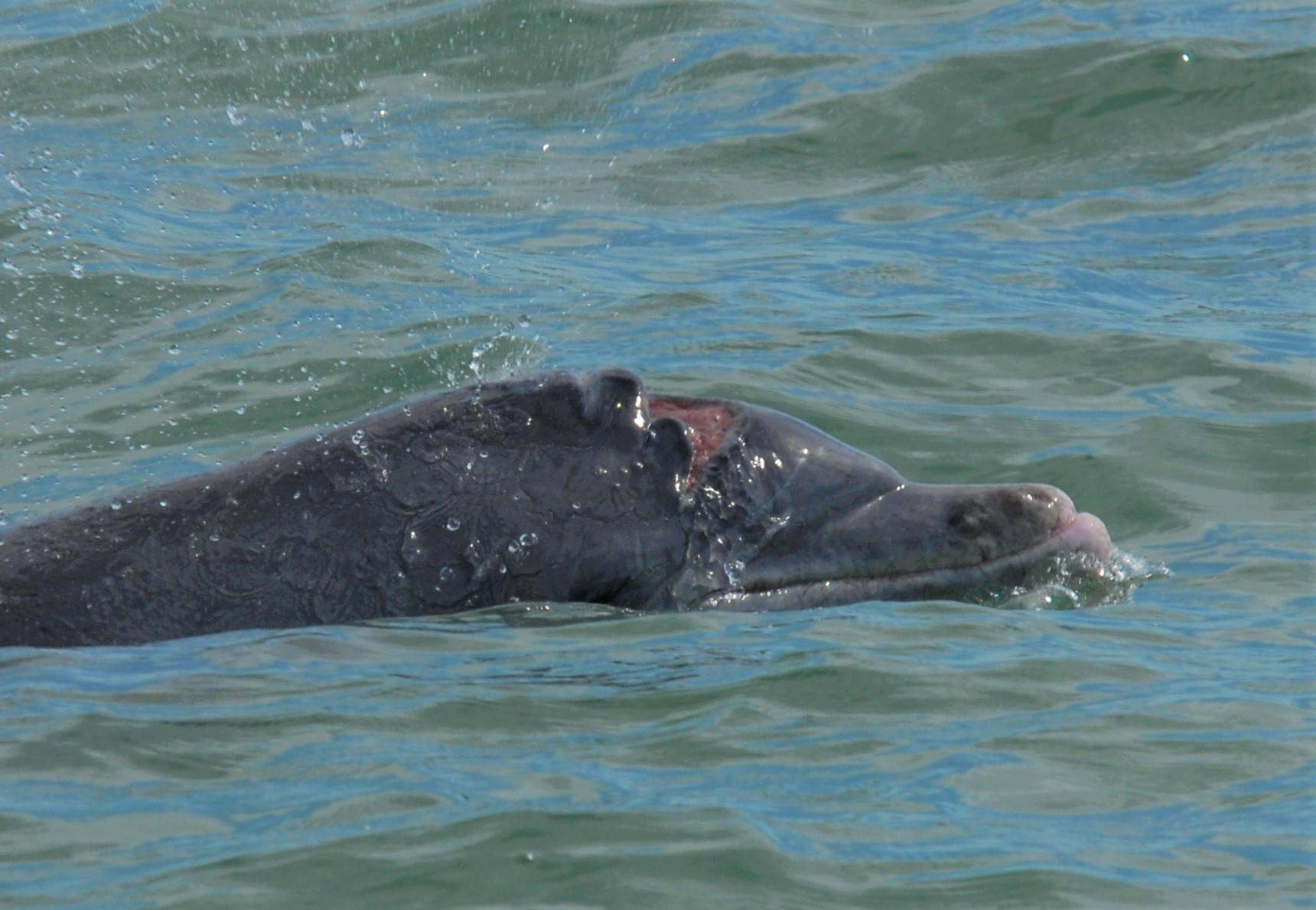 Some time before March 2012 when I took the picture below, the wound had closed. 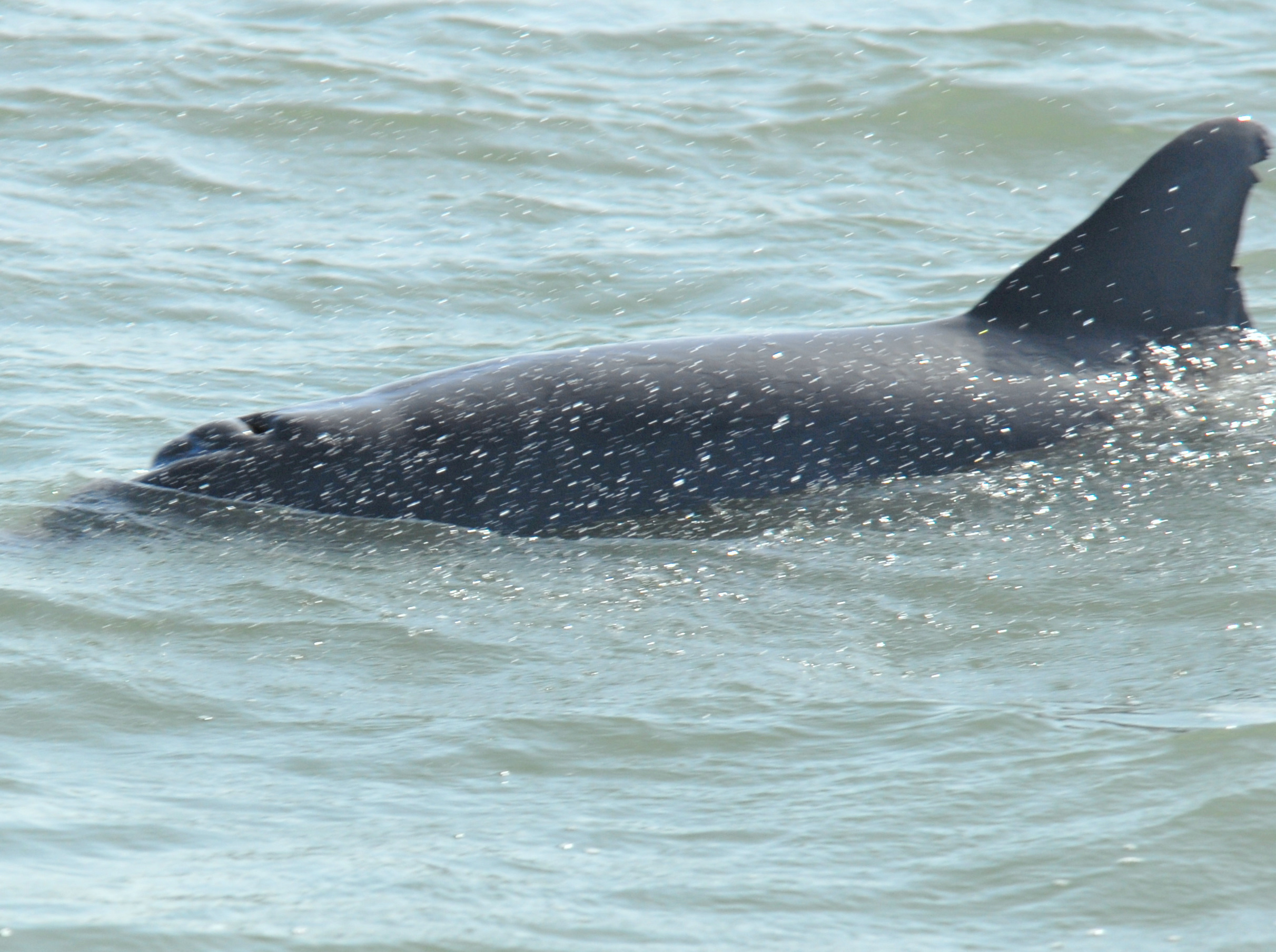 While the melon directly in front of the blowhole is misshaped, the wound has completely healed over.

And then, in September, something really remarkable happened: Rangle gave birth. It turns out that she was pregnant throughout this whole ordeal! Her calf, Bubbles thrived and is still alive today 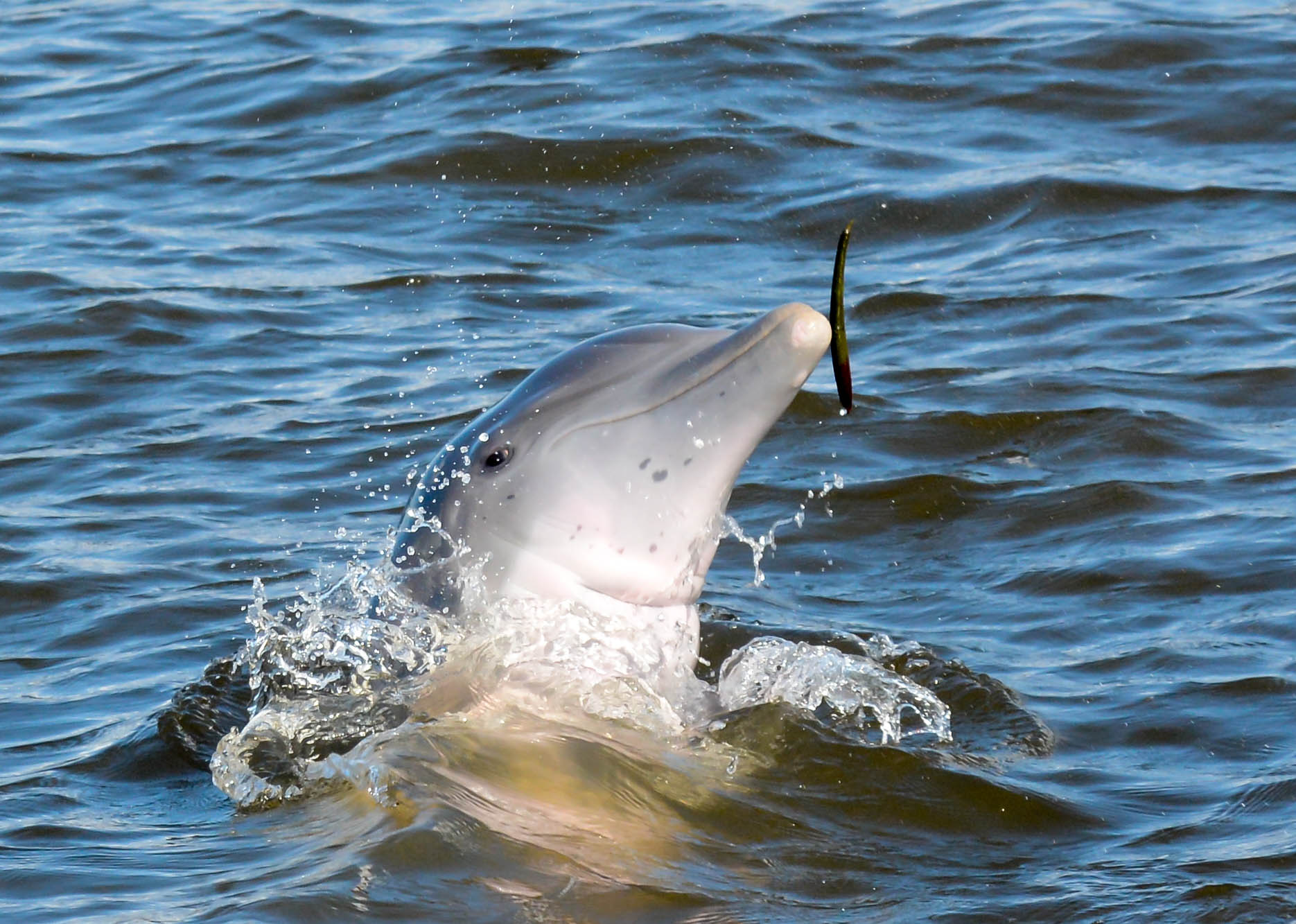 September 2015 – Bubbles entertains herself with a mangrove propagule.

Almost exactly three years after Bubbles was born, Rangle gave birth to another calf – Ollie that she successfully raised to independence. In early November 2019, we spotted Rangle in Capri Pass with a new born calf we named Piper.

Our only sighting of Piper

Unfortunately that was our only sighting of Piper. Six days later Rangle was near the Jolly Bridge. There was no calf in sight.

Instead Rangle was in the company of a two allied males – Bangle and Finch.

A female dolphin can go into estrus within two weeks of losing a calf. In this case, these two males began their courtship immediately to take advantage of this timeline.

They would continue their association with her for months, sometimes running into competition from other males like Hatchet and Capri. 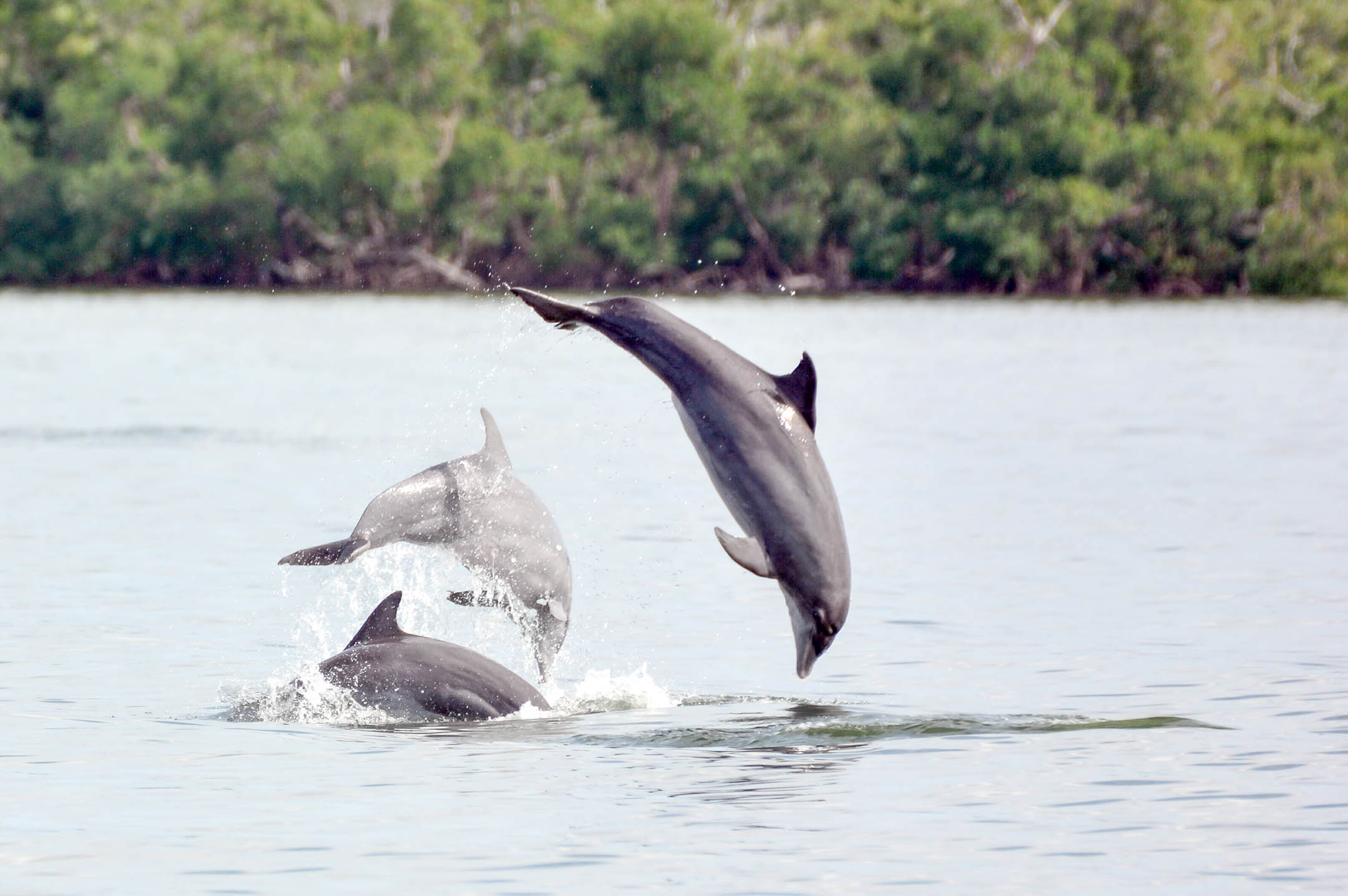 Two males – Bangle and Finch – who long ago formed an alliance begin a long courtship with Rangle, immediately after the loss of her calf.

For most of this time I was conducting surveys on the northern end of Marco Island by The Big Marco Pass, (Area One of The Dolphin Study).

We would see Rangle there regularly but not as often as some of the other Area One females like Halfway. I often wondered where she was during the long spells when we didn’t come across her.

Lately I have expanded my research to include regular surveys on the other end of the island and two other passes – Caxambas and Coon Key. One of the fun things about this new focus is the ability to get a fuller picture of the ranging patterns of Dolphins like Rangle. She has shown up six times recently with her new calf, Daisy. 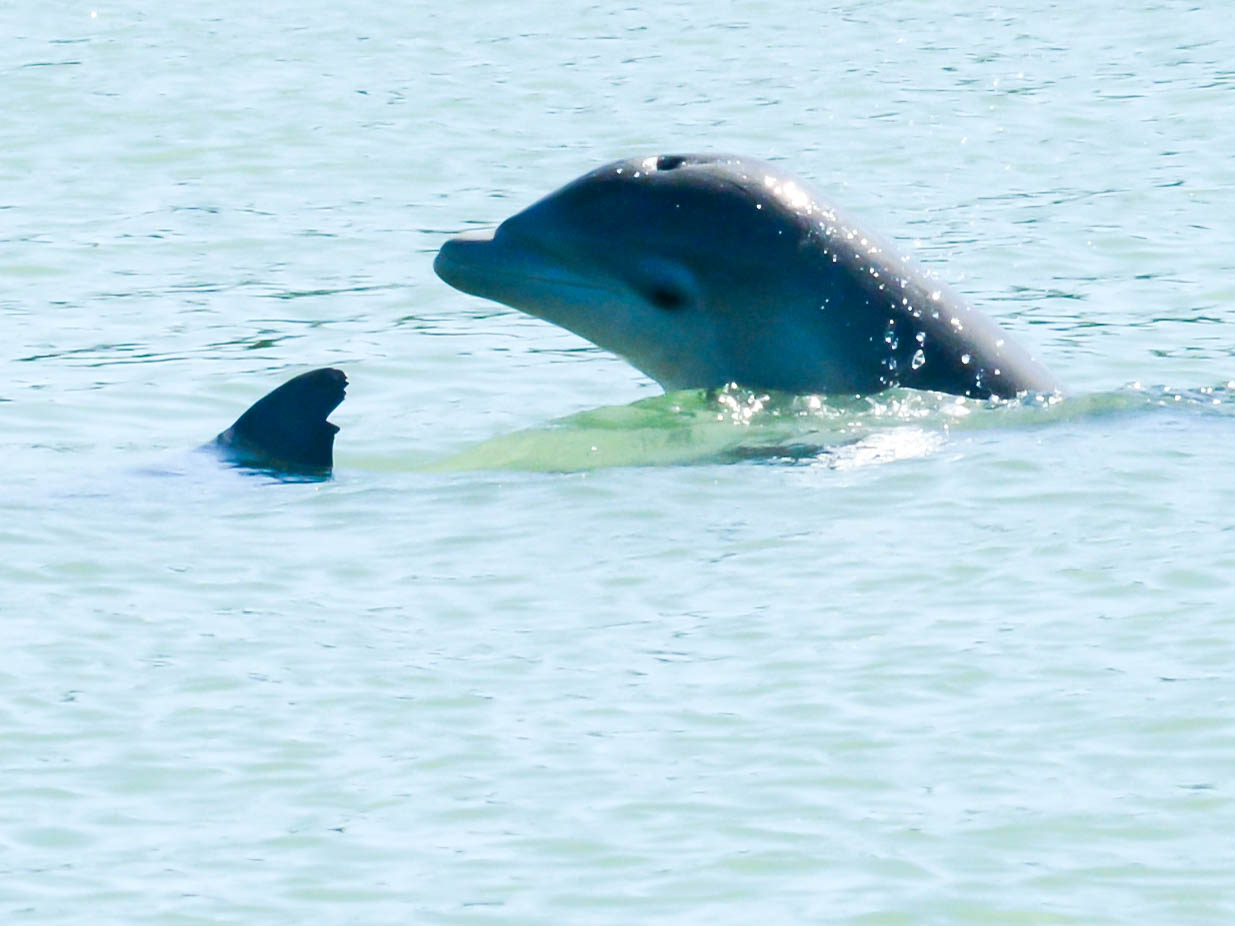 As Rangle’s story shows, raising a dolphin calf is difficult.

In those first months, the mother of a recently born calf will have to double her caloric intake in order to produce enough milk to nourish the calf. And she will have to do this while staying alert to the many threats to the survival of her inexperienced calf.  That is a lot to juggle.

One threat is people in boats, specifically people in boats that intentionally drive fast near dolphins in order to encourage them to ride in their wake.

Go to nearly any dolphin tour advertisement and the image designed to entice you to take their trip is that of a dolphin leaping into the air behind the boat.  Sometimes playful dolphins will spontaneously engage in this behavior.

The problem is that tour operators have, through their advertising, created in you an expectation that this will occur during your trip with them.  To satisfy that expectation they will actively try to alter the behavior of the dolphins they encounter – dolphins that are socializing, resting, feeding or traveling will be encouraged to stop that activity which is important to their survival and engage in an activity designed for your amusement.  The attempt, which involves driving past them at a speed designed to create a large wake, will sometimes be successful.  It will always be dangerous and disruptive to what the dolphins are doing.

And for that reason, it will also be illegal.

Bottlenose dolphins are protected from harassment under the Marine Mammal Protection Act.  Under the act, harassment falls into two categories – level A and level B. 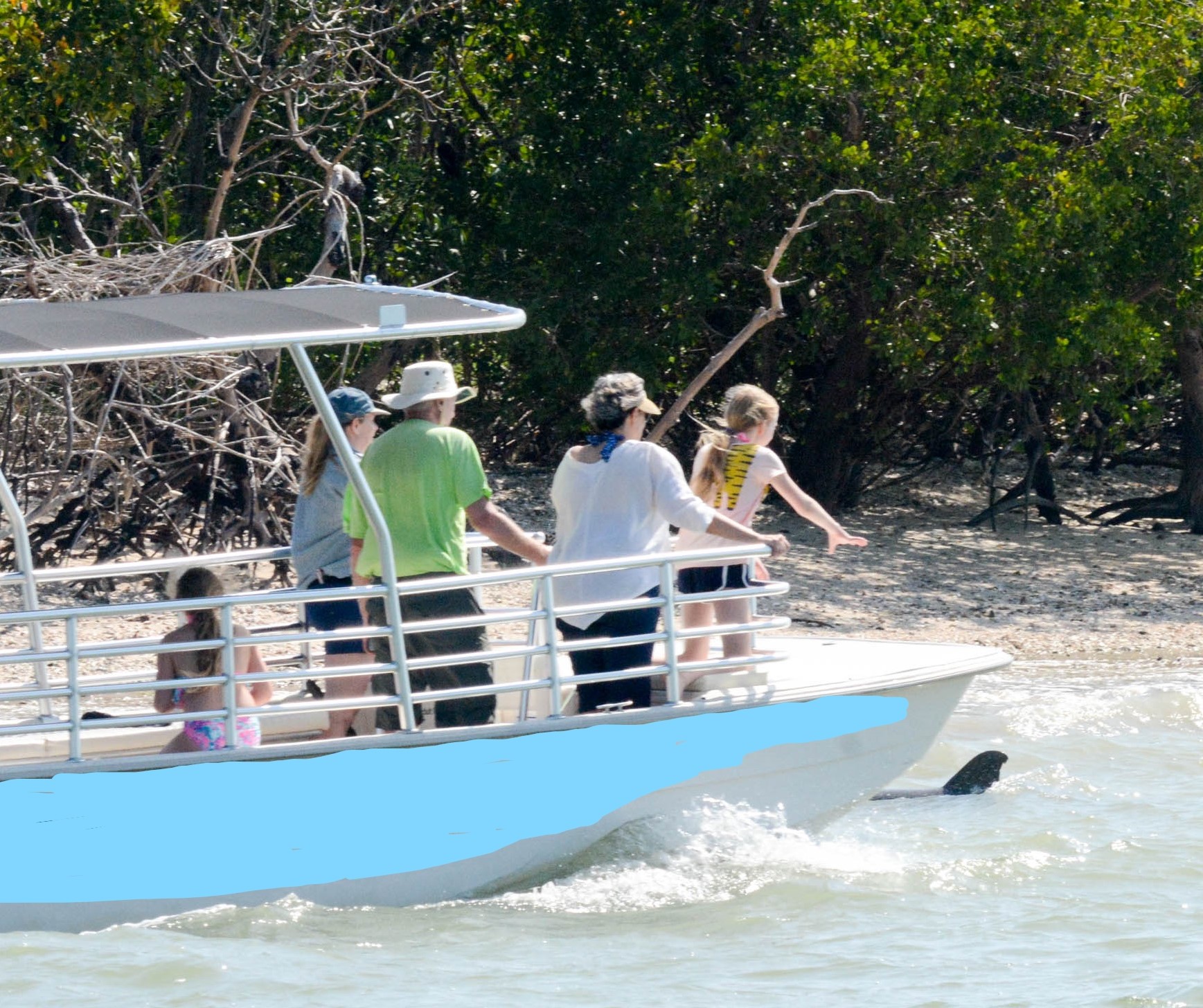 A tour boat races past a dolphin feeding along the shore in an attempt to alter its behavior.

Attempting to elicit a response from dolphins by maneuvering your boat next to them at a speed designed to produce a wake manages to encompass both levels of harassment – it will certainly be disruptive and it may result in injury. 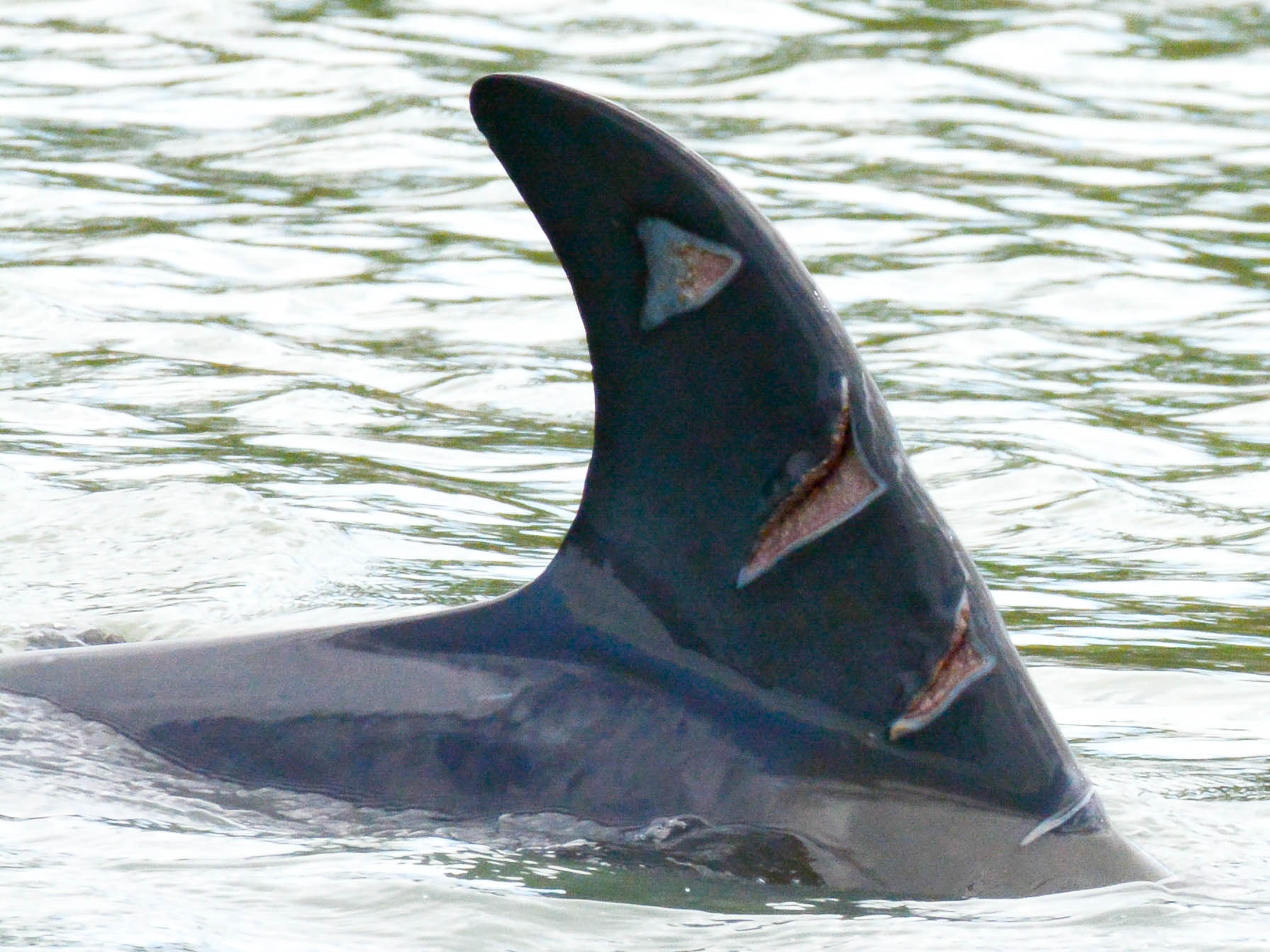 Just as we never know what burdens our fellow humans are carrying, we can’t know what challenges the dolphins we encounter are facing. It may be that they are a mother, like Rangle, pregnant, caring for a calf and trying to meet her caloric needs and that of her growing fetus. The last thing she needs is to worry about is multiple boats approaching her and her calf at speeds designed to interfere with what she is doing.

Let’s resolve to respect dolphins and put an end to this behavior.