I Have Beheld the Future

When people view and treat the environment as being as precious as their family, children and friends, then we will find a healthy planet that can sustain all its inhabitants for future generations.

from the Honest Eco vision statement

Once, a few years back, I booked a snorkeling trip for myself and my kids out of Pennekamp State Park down in the Florida Keys. It was destined to be one of those epically bad experiences whose value emerges only years later when recalling the experience elicits laughs.

We all piled onto the crowded boat, sitting facing inward. The mate appeared, gave the obligatory safety talk, then disappeared for the remainder of the trip out to the reef. Motoring out to the dive site under diesel power we resembled nothing so much troops n a transport ship, each of us clutching our equipment with equal parts hope and apprehension.

It was a windy day and, once anchored, we were instructed to swim directly toward the reef without deviating lest we be swept clear. Most of the passengers found the conditions in the water alarming and immediately made their way back to the boat. My kids and I actually did make it to the reef – I remember looking down and seeing it race by fast enough that it was difficult to fix my eyes on anything in particular. The current tore a plastic disposable camera from my daughter’s wrist.

Last week I found myself in an alternative universe, the promise land really. My partner at Dolphin Research Tours, Robyn Standke and I were gliding across turquoise waters to the Key West National Wildlife Refuge aboard a solar powered hybrid vessel, the E/V Squid, captained by the witty and personable Captain Mary Houska. 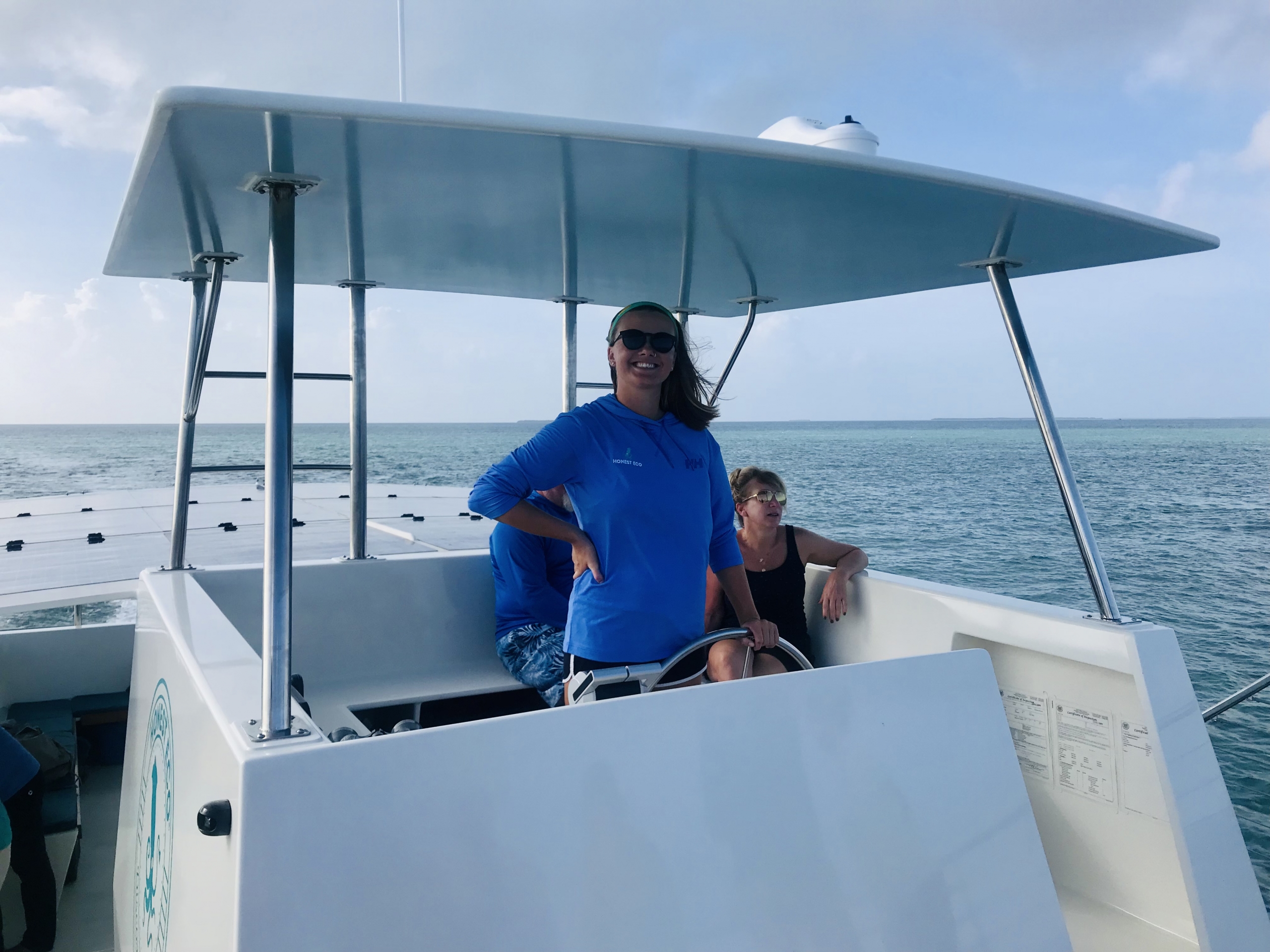 Captain Mary Houska at the bridge of The E/V Squid, Key West Florida. The Squid’s solar panels are visible behind her.

We were gathered around a chart of the local waters listening to Jaclyn Doody, an articulate and passionate scientist and our guide for the day. She was describing how the area had emerged over geologic time from a succession of rising and falling seas and came to be protected in modern times initially as a refuge for wading birds that were being exterminated with ruthless efficiency to feed the trade in their plumes. 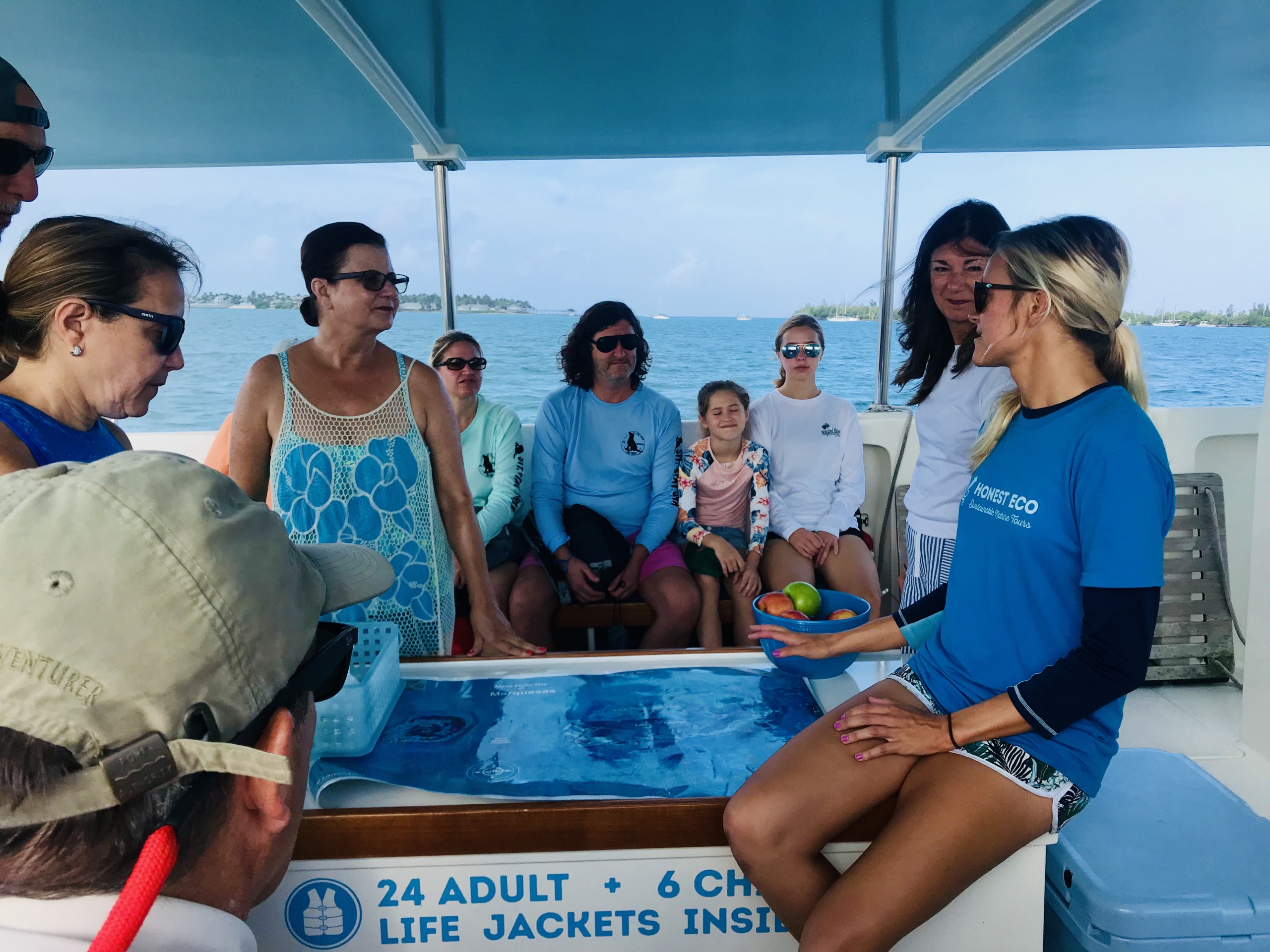 We were Jaclyn’s guests on this trip. She had recently begun conducting dolphin i.d. research during Honest Eco’s trips and had reached out to us when she saw that we too had incorporated a citizen-science element to our trips at Dolphin Research Tours. When Robyn and I saw Honest Eco’s website and their commitment to respecting the dolphins during their tours, we knew we had to make a pilgrimage to Key West to meet Jaclyn and learn what we could from this amazing company.

Jaclyn’s expertise is marine mammals. Her first experience studying bottlenose dolphins was working with the Eckerd College Dolphin Project. There she participated in a classic photo-identification study to learn about the dolphins resident to the waters around St. Petersburg and Tampa.

Since then, her passion for marine mammal research has found her conducting photo-identification work on humpback whales, minke whales, and white-beaked dolphins in Reykjavik Iceland and Maui where she participated in photo-ID work on bottlenose dolphins, pan tropical spotted dolphins and spinner dolphins, as well as short-finned pilot whales, false killer whales and humpback whales! with the Pacific Whale Foundation.

Last year she reached out to Billy Litmer, the founder of Honest Eco in Key West and proposed the idea of adding a research component to their dolphin and snorkeling tours. Billy flew her out to Key West and The Honest Eco Dolphin Identification Project was born. Since she began her work, Jaclyn has identified 124 individual dolphins by the unique shape of their dorsal fins.

Curiosity is always the impetus for this sort of study. In Jaclyn’s case she is curious about several aspects of the local dolphin’s behavior. She wants to determine the size of the community of dolphins that reside near Key West. She wants to identify the adult females in the community and whether or not they prefer to associate with particular females in maternity groups. Finally, she is interested in how the tides effect the behavior of this community of dolphins that live in an area of vast shallows cut through with deeper channels. 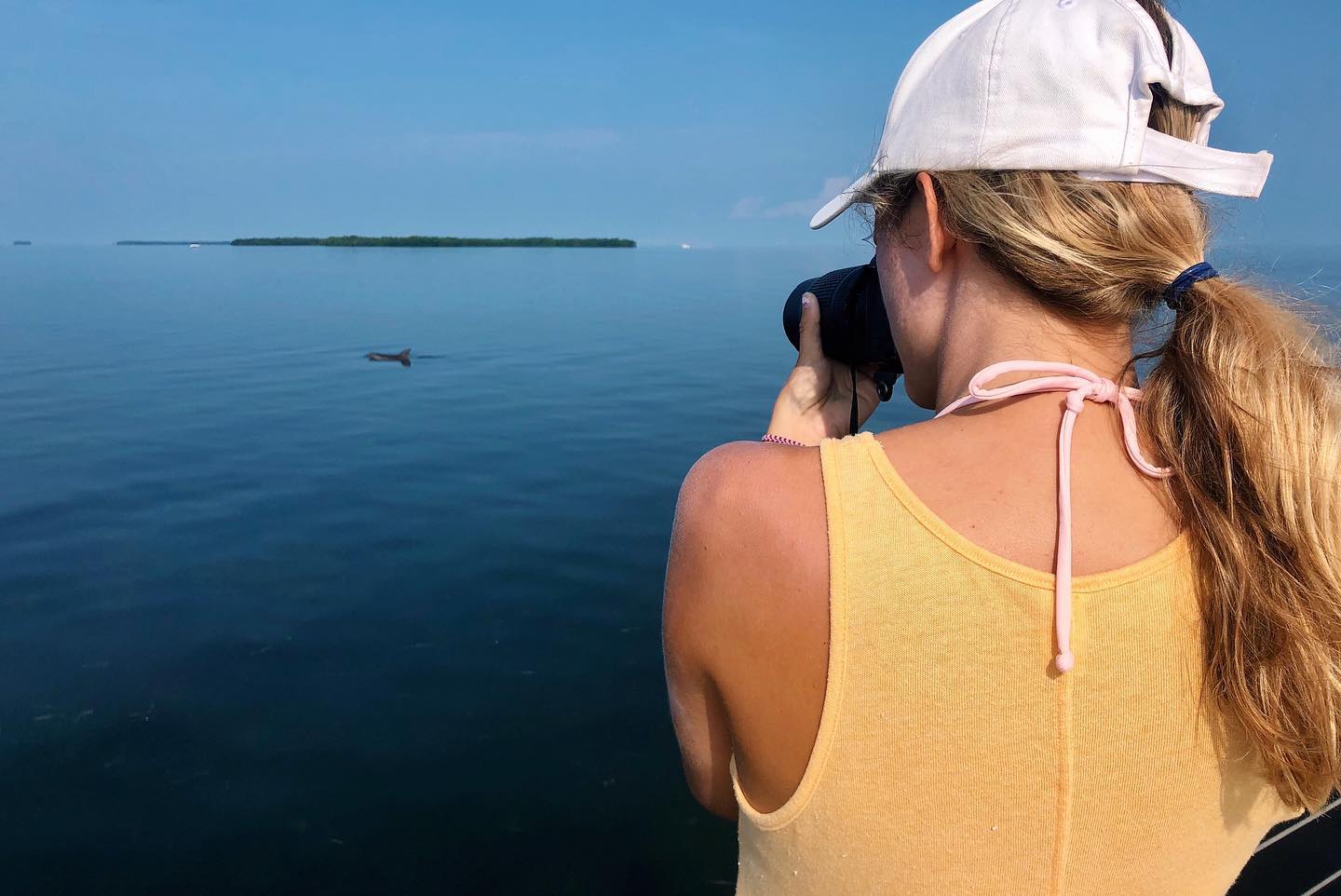 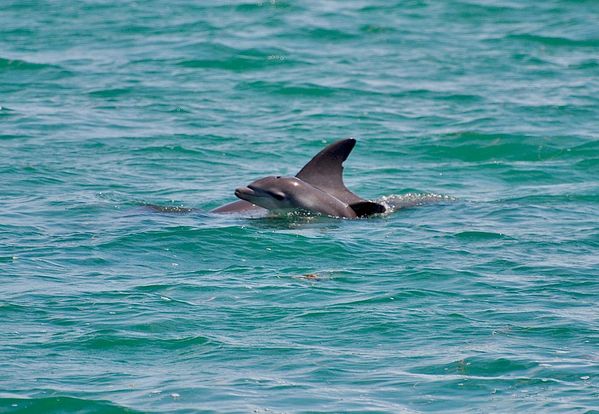 What a treat it was to have as our guide someone with expertise that was conducting research in the waters we were exploring. I know from my experience as the owner of Dolphin Research Tours that the research I have been doing around Marco Island since 2006 enriches the experience I am able to offer our guests. On this trip we were the recipient of this level of commitment and expertise and that was very nice indeed.

But then everything about Honest Eco astonishes me

As you approach an area the crew has dubbed ‘the dolphin playground’ due to the tendency of individuals from the local resident community of bottlenose dolphins to congregate there, Jaclyn will serve you a plate of sliced vegetables and herbed hummus from a Key West eatery and market called Date & Thyme. She doesn’t take a cellophane wrapped plate of preprepared food from a cooler and set it out for all to partake of; she cuts the carrots, cucumbers, red bell peppers fresh, arranges them around the homemade hummus and presents it to you personally.

This struck me and strikes me still as emblematic of every aspect of this wonderful company. Everywhere they could take a shortcut, they have gone the extra mile and done so mindfully. Honest Eco partners with a Key West Eatery and Market called Date & Thyme to provide this plate (and a second plate of refreshing fresh fruit after snorkeling!)

Visiting Date & Thyme after the trip (highly recommended), I read this from their mission statement:

True health and wellness come not only from the food we eat, but the thoughts we think, the actions we take, and how we choose to live our everyday lives

From the mission statement of Date & Thyme

It is no surprise that they chose to partner with this company to supply their food. This principle of mindfulness captures perfectly the level of care Honest Eco extends not just to their guests but also to the habitat they operate in and the dolphins that live there.

One of the thoughts the owners thought was how to design an ecotour that would have as little impact as possible in this respect. And if you have grown (justifiably) cynical about companies tossing around terms like sustainability, consider this: one of the actions the founder Billy Litmer took was to design and build from scratch a lithium-ion Hybrid Electric boat – the first for charter in the United States. This is the vessel we experienced during our trip and it is a brilliant platform from which to watch dolphins and snorkel from. 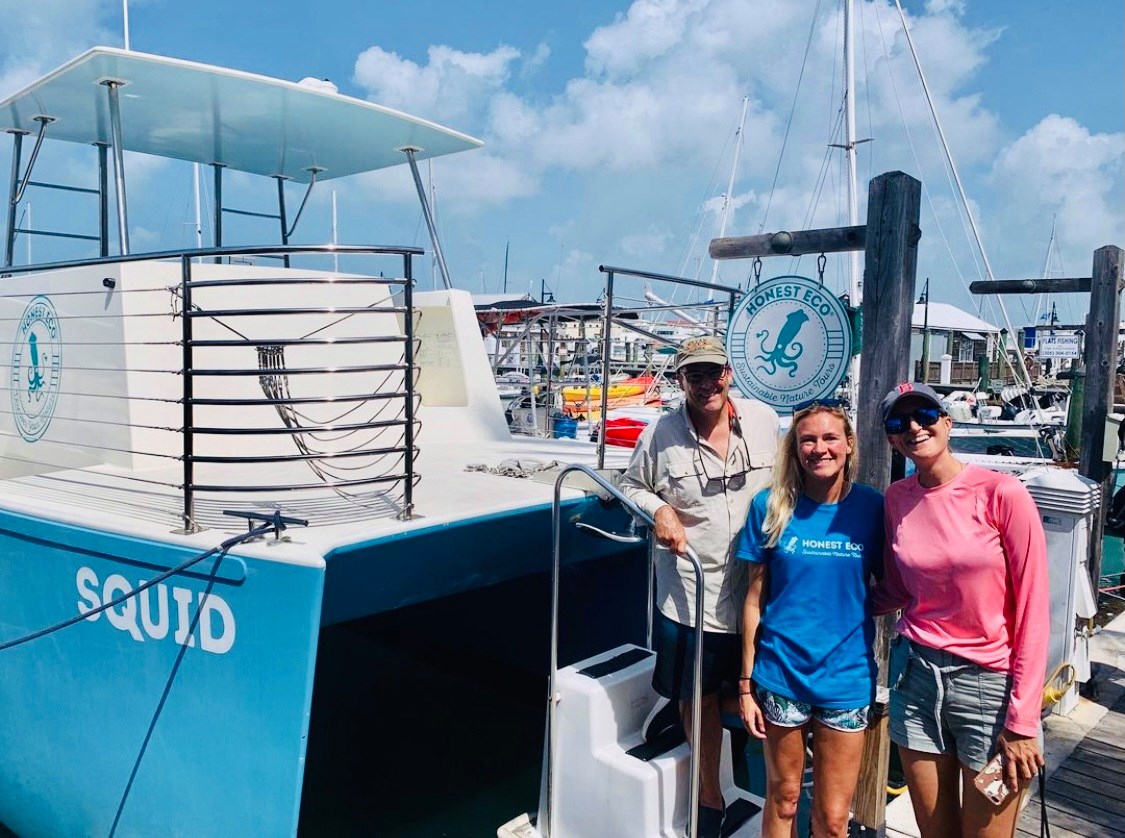 The author Kent Morse, Jaclyn Doody of Honest Eco and Robyn Standke of Dolphin Research Tours in front of the E/V/ Squid 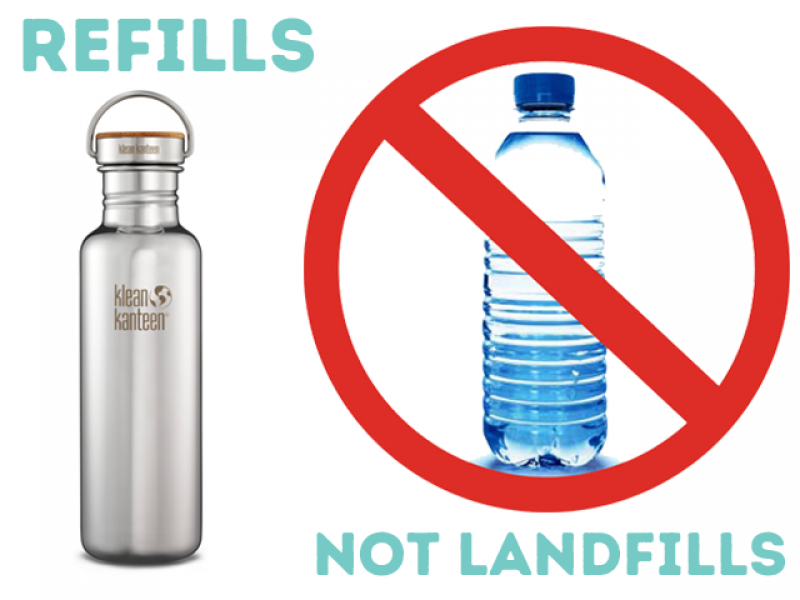 Besides lowering their carbon footprint, another action Honest Eco has taken is to eliminate the use of single use plastic water bottles on the boat. Instead, they offer refillable stainless-steel bottles for guests to use during the trip. It seems like an obvious step but it does take more effort and I am hard pressed to think of another tour that does the same. Let us all immediately copy this approach and let the tours we patronize know that we would appreciate them doing the same.

Where Honest Eco does make an impact is as a leader in the ecotour industry, inspiring the sorts of changes that will make the industry truly ethical and sustainable.

A staple of the dolphin watching industry in Florida is for tour boats to accelerate past dolphins close enough and at a speed that will create a large wake – large enough to entice the dolphins to stop what they are doing and follow behind the boat.

Honest Eco operates under the principle that the better, more ethical (an ultimately more satisfying) option is to observe the natural behavior of wild dolphins from a respectful distance without interfering with or intentionally altering their behavior. By becoming one of the top rated ecotours in Key West they have shown that respecting the integrity of the local wildlife is not an impediment to a thriving business.

It’s a minority opinion at the moment, but Honest Eco’s principled leadership gives me hope. I am reminded of a story that Jaclyn told about how the beginning of the end of the plume trade that once threatened Florida’s wading birds with extinction began with two woman – Harriet Hemenway and Minna Hall. They began a boycott of fashion that included the bird’s plumage and then began enlisting their high society acquaintances to the cause. What was once commonplace – the killing of a Snowy Egret for fashion’s sake – is now unthinkable.

The leadership example of tour companies like Honest Eco in Key West and Dolphin Research Tours in Marco Island may yet lead to the emergence of a tour industry in Florida that operates with the well being of the dolphins in mind.

We saw dolphins on three occasions during the trip, including this fellow that swam over to the E/V Squid to check us out.

The other cool aspect of the trip was a portion devoted to snorkeling. After a few hours of dolphin watching, what a pleasure to plunge into 85 degree water and take a peak below the surface.

It is difficult to capture good images underwater, especially if you are not super used to snorkeling. Apparently the folks at Honest Eco know this. Jaclyn joined us for the snorkel with her camera and before we had arrived back at the dock had air dropped still pics and video to our phones. Now that is service. 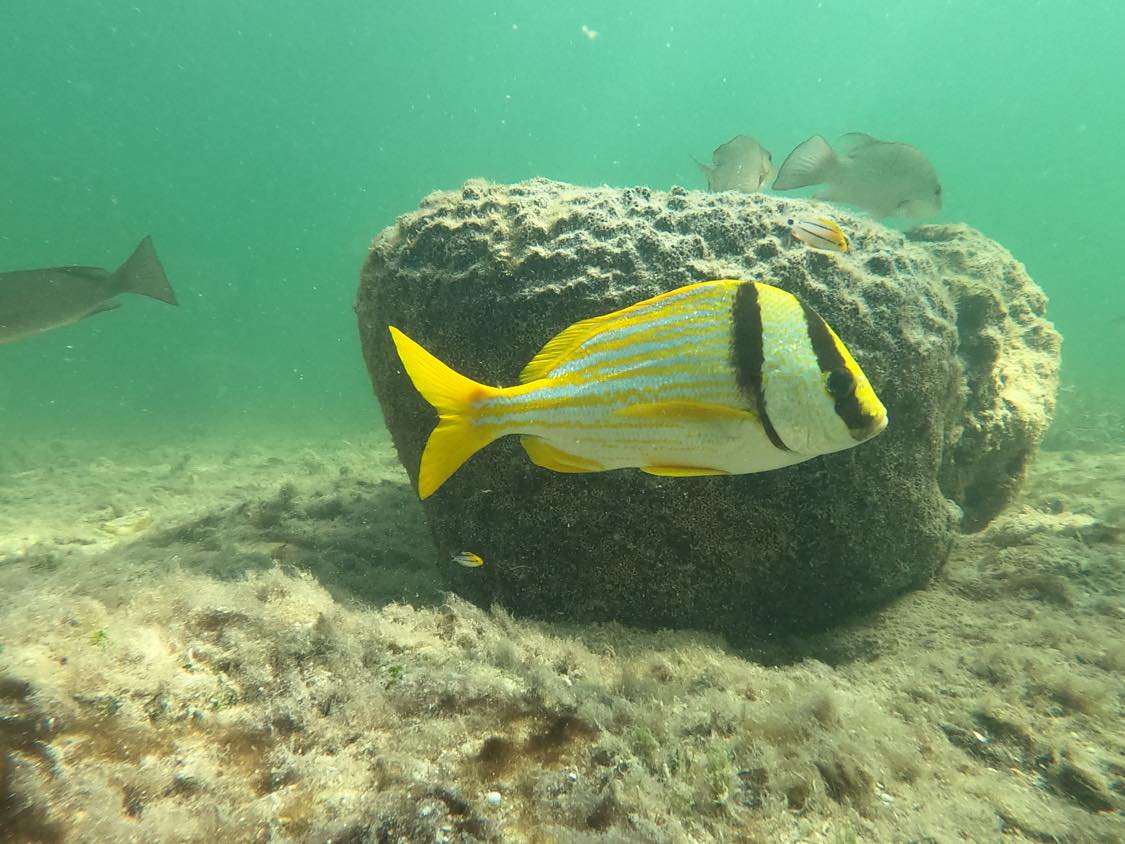 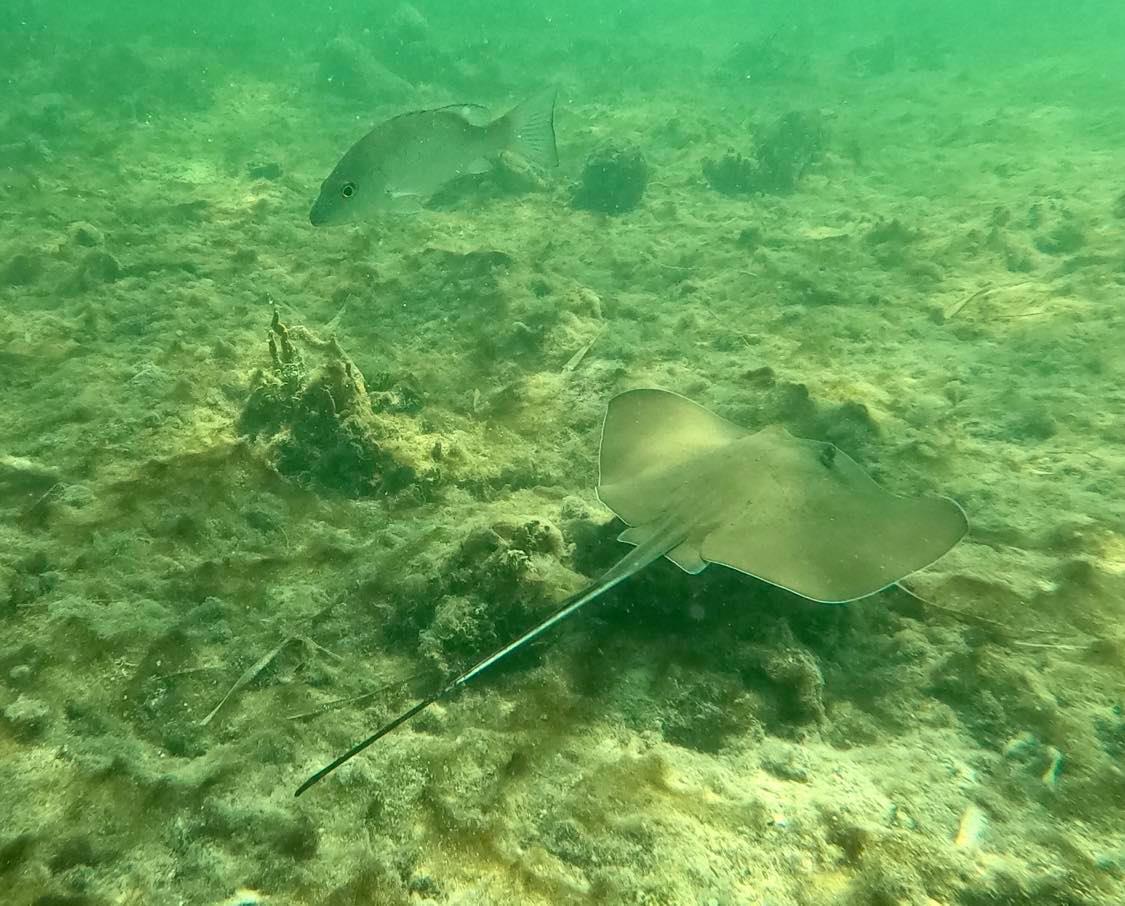 If you plan a side trip to Key West, include a trip with Honest Eco in your plans. We took the four-hour combination Dolphin watch/ snorkeling trip but they also include options that include kayaking.

And even if you don’t have immediate plans to visit Key West, check out their delightful website. It will do your heart good. It is full of great stories of fascinating, principled individuals working to build an ecotour business that delights its guests and works in harmony with its environment.