How Many Dolphins Live Around Marco Island? 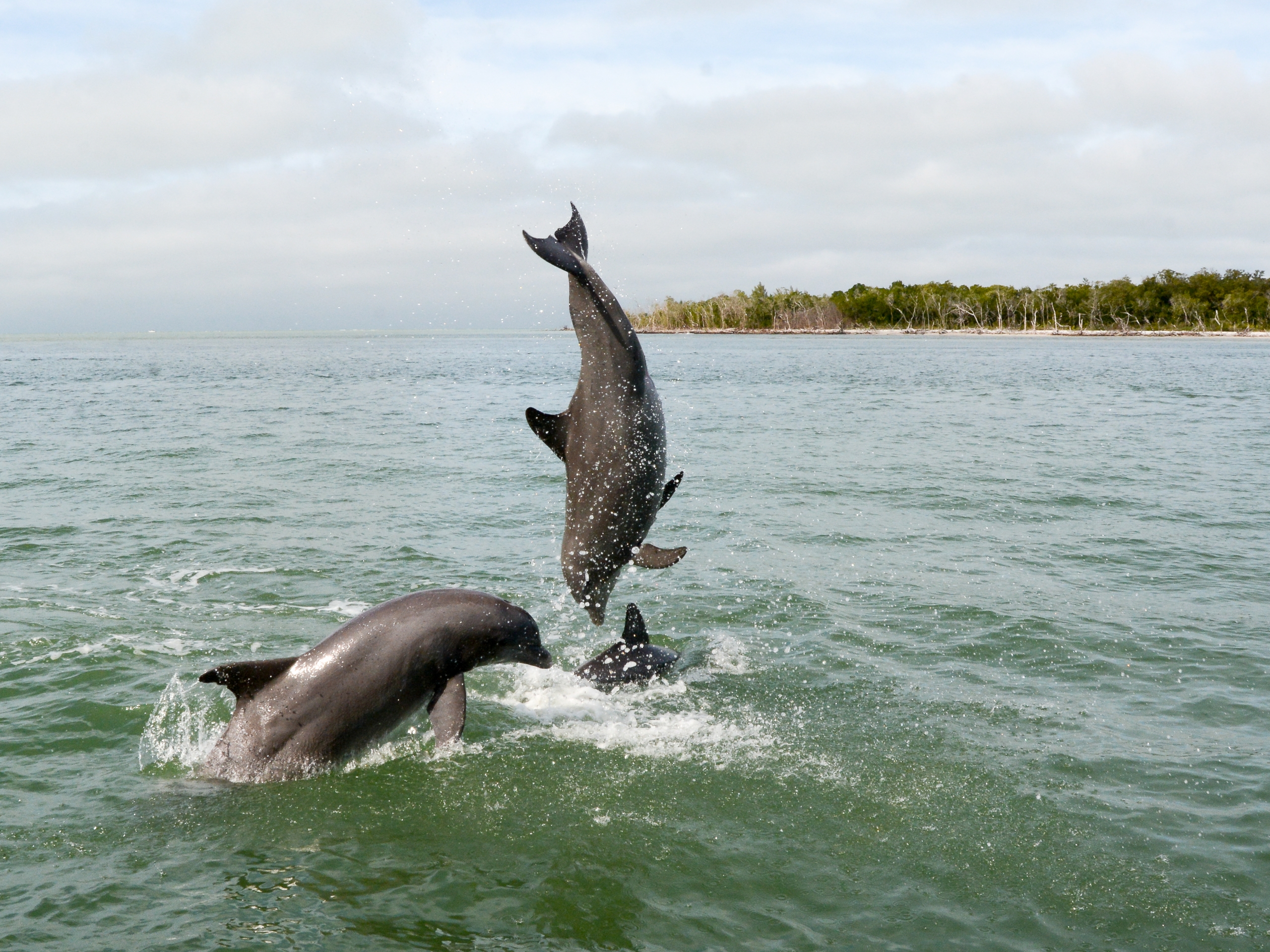 The results of 150 new boat-based surveys conducted by our partner Dolphin Research Tours  between January and November 2021 have clarified the number of dolphins that live around Marco Island and provided fascinating insights into how they are distributed.

It is about 25 miles from Rookery Bay to the northern end of the 10,000 Island Wilderness preserve, an area that encompasses Marco Island and Goodland. The Dolphin Study’s photo-identification work suggests there are over 400 dolphins that use this area.

3600 + photo-identification surveys over 16 years suggest >400 dolphins use this area.

The only dolphins found in these waters are a coastal, shallow water variety of the bottlenose. They are smaller than the bottlenose dolphins that live in the deep sea and they are residential. For most, it is as they were born into a small town and never moved or travelled far. 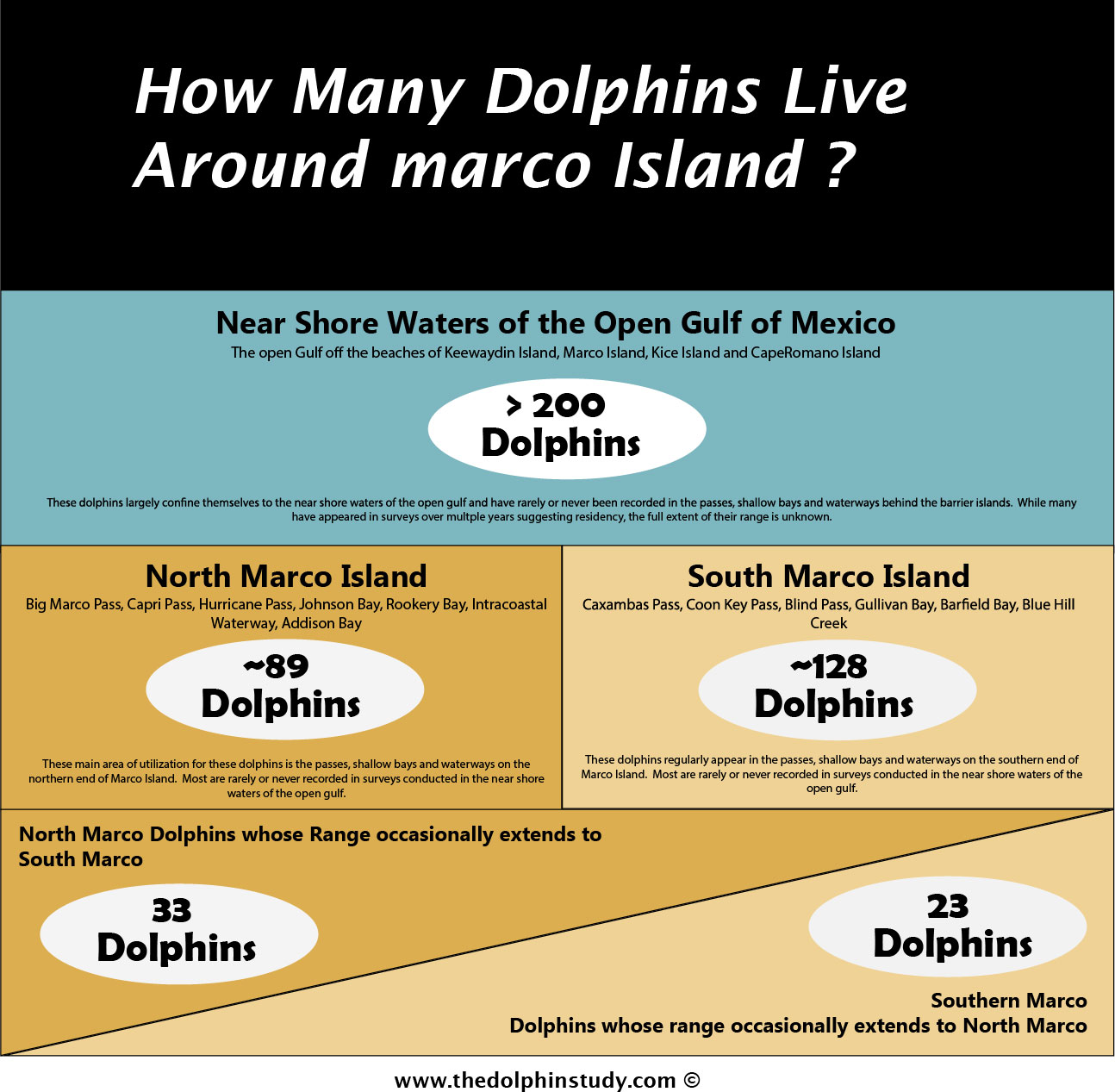 These dolphins are divided (or rather have divided themselves) into two large groups.

The dolphins in this second ‘backwater’ group can themselves be divided into two groups.

During these surveys 550 sightings were recorded and 170 individual dolphins were identified.

In other words, the home range of 126 out of 170 dolphins we recorded on the southern end of the island during these new surveys rarely or never extends to the northern end of Marco Island.

This was strong evidence supporting the hypothesis that there are two separate but overlapping communities of ‘backwater’ dolphins around Marco – one of which centered around Big Marco Pass on the northern end of Marco and second centered around Coon Key Pass on the southern end. 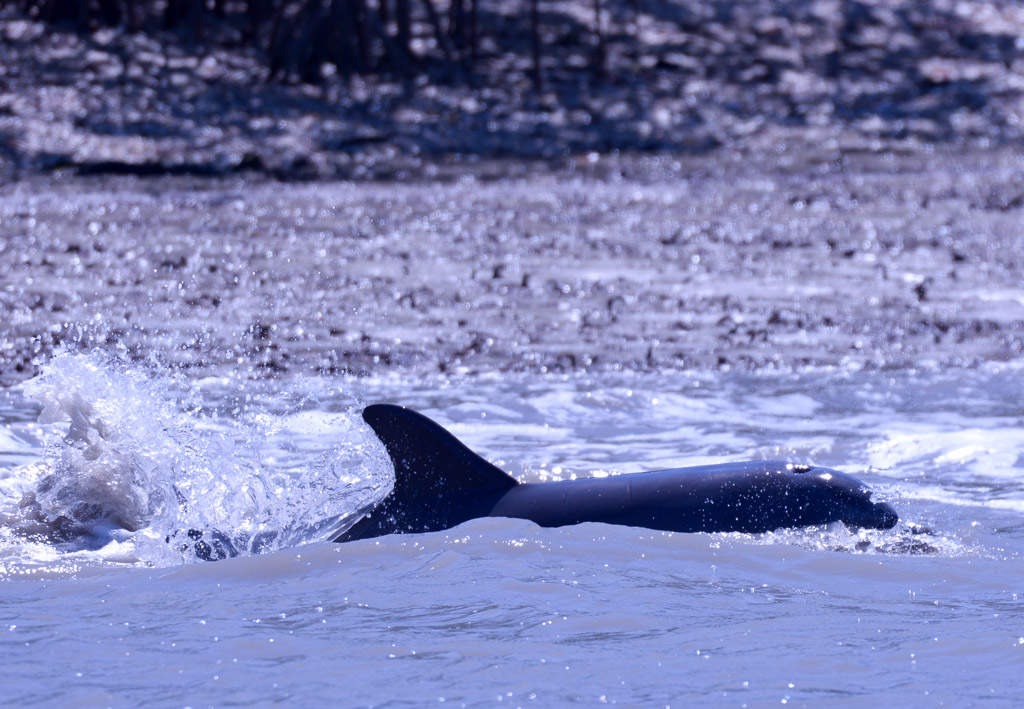 Goodland based mom Goodsix works the shallows in Coon Key Pass. She has never ventured to the northern end of the island.

Tunic and Skipper are good examples of dolphins that fit into the two community hypothesis. Skipper is a young female approaching maturity that was born on the northern end of Marco Island. Tunic is an adult female caring for a calf that lives on the southern end of the island. Their ranges rarely overlap. 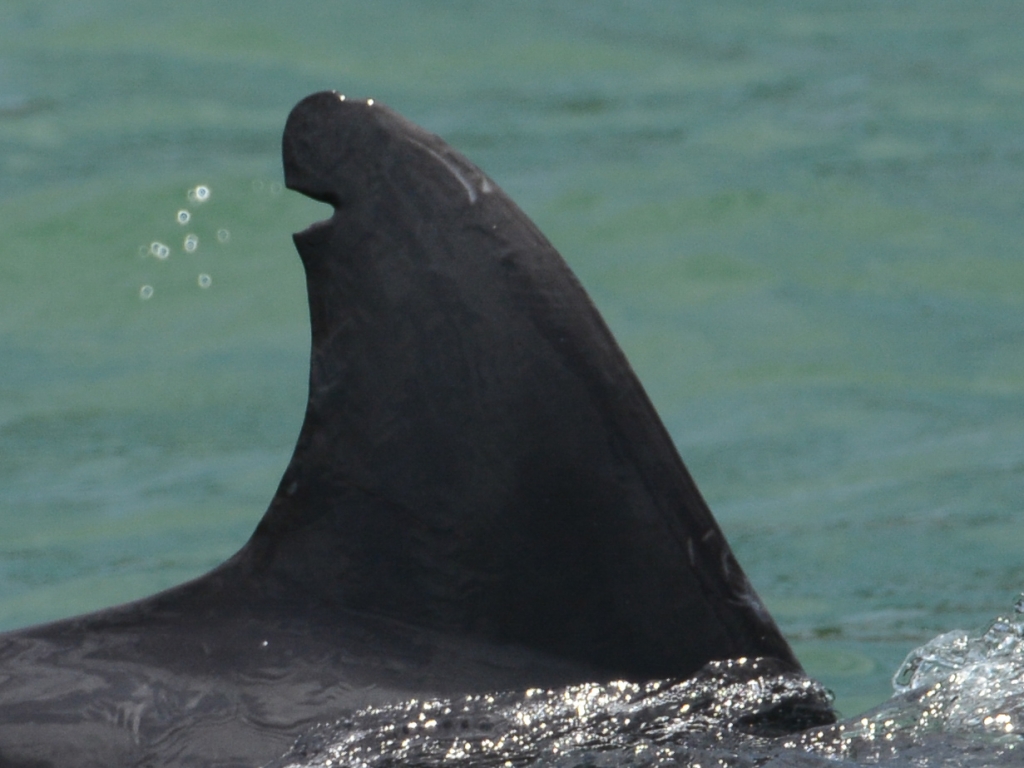 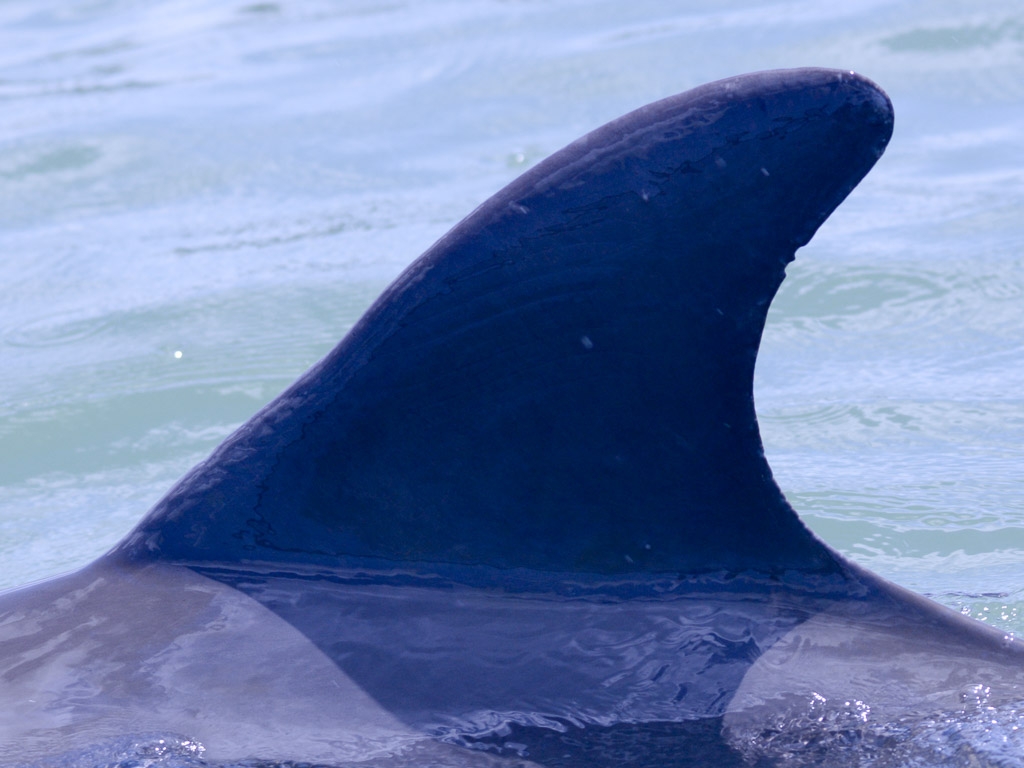 You can compare individual sighting histories for each of the over 200 dolphins that call the passes and shallow bays around Marco Island their home at The Dolphin Study database. Select either Marco Island (for the northern group) or Goodland (for the southern group) from the drop down selection on the dashboard. As you do this you will notice that the range of some of these dolphins do not fit this simple pattern of northern and southern residents.

The home range of most of the dolphins catalogued during surveys of the passes, bays and waterways around Marco Island inland of the open Gulf of Mexico are confined to either the northern or the southern end of the island.

Many, however, are not. As the infographic above suggests, the range of 42 dolphins include both areas at least occasionally. And for at least another 6 dolphins the distinction is meaningless – they regularly use both areas.

The sighting history of these dolphins suggest that dividing the dolphins into two communities, while helpful to a point, is more reflective of the survey approach of the researchers than the actual reality of the individual dolphins.

A close look at each dolphin’s sighting history suggests that a better way to view the distribution of dolphins is as a patchwork of overlapping individual home ranges.

In the map above the sighting history of three female dolphins – Victoria, Moab and Goodsix are presented as colored stars. The colored outlines are home ranges suggested by these sightings. Moab’s range is a bit speculative – I am supposing that since she has never appeared north of Coon Key Pass, her full range extends south into the 10,000 Islands.

Interestingly Victoria seems to move between the various passes by way of the open gulf. Her association patterns, however, place her firmly in the backwater community. While using the gulf to move from the northern end of the island to the south, she does not appear to interact much with those dolphins that confine their range to the open gulf.

By now, we have catalogued nearly every dolphin that lives in the vicinity of Marco Island – certainly those that confine themselves to the backwaters. Their profiles can be viewed in The Dolphin Study database.

Individuals and families are invited to join us aboard Dolphin Research Tours ecotours as we explore The 10,000 Island Wilderness Preserve and collect sighting data on these dolphins.

Each new sighting adds to our knowledge of Marco Island’s dolphin communities and the complex patchwork of its member’s home ranges.